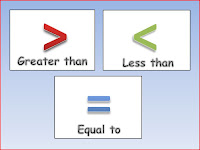 Here's another song for you!

This one is fun,upbeat and addresses comparing numbers for math.
Greater than, less than and equal to are all words we use when we compare numbers.
I can remember drawing an alligator to help learn how to tell if one number was greater than another when I was in elementary school (just a few years ago).

Another idea would be to have several cards made of each sign, and pass them out to your students. Play the song and as each sign is mentioned, those students have to hold up their cards (if they have that particular sign).

I think it's a very upbeat song to introduce greater than, less than, and equal to for a group of students! What do you think?

As always, thanks for stopping by! Be sure to come back tomorrow for another song!
Posted by Amanda Ellis, MT-BC at 5:00 AM

Amanda Ellis, MT-BC
Welcome to More with Music! My name is Amanda Ellis and I am a board-certified music therapist. This site is for parents, teachers & music therapists who are searching for songs and ideas to help teach children of all ages. If you have any questions or comments, please email me @ morewithmusic@gmail.com Thanks for stopping by!