Movin' Around the World

Welcome Back!
It's Monday and that means it's time for another continent song!

Our next stop will be Asia.
Asia is a very large continent. When I began researching and writing the beginnings of a song about Asia, I decided to do something a little different. Instead of a song about Asia, I decided to write a song about a country in Asia. I thought students would be more familiar (or at least distantly familiar with one of the countries because of news and media coverage about the countries in Asia), compared to the whole continent itself.

So, today's song will be a song about China. 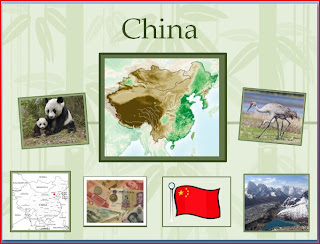 I purposely structured this song so that each phrase would repeat to give time for students (verbal and non-verbal), to sing along, as well as give the teacher time to show visual pictures representing each verse to the students.

If you would like a song sheet for the China song, simply an email to morewithmusic@gmail.com

As always, thanks for stopping by!
Posted by Amanda Ellis, MT-BC at 5:00 AM

Amanda Ellis, MT-BC
Welcome to More with Music! My name is Amanda Ellis and I am a board-certified music therapist. This site is for parents, teachers & music therapists who are searching for songs and ideas to help teach children of all ages. If you have any questions or comments, please email me @ morewithmusic@gmail.com Thanks for stopping by!